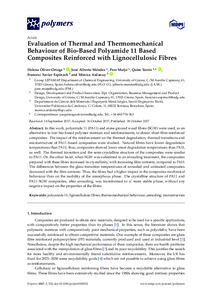 Except where otherwise noted, content on this work is licensed under a Creative Commons license : Attribution 3.0 Spain
Abstract
In this work, polyamide 11 (PA11) and stone ground wood fibres (SGW) were used, as an alternative to non-bio-based polymer matrices and reinforcements, to obtain short fibre reinforced composites. The impact of the reinforcement on the thermal degradation, thermal transitions and microstructure of PA11-based composites were studied. Natural fibres have lower degradation temperatures than PA11, thus, composites showed lower onset degradation temperatures than PA11, as well. The thermal transition and the semi-crystalline structure of the composites were similar to PA11. On the other hand, when SGW was submitted to an annealing treatment, the composites prepared with these fibres increased its crystallinity, with increasing fibre contents, compared to PA11. The differences between the glass transition temperatures of annealed and untreated composites decreased with the fibre contents. Thus, the fibres had a higher impact in the composites mechanical behaviour than on the mobility of the amorphous phase. The crystalline structure of PA11 and PA11-SGW composites, after annealing, was transformed to ’ more stable phase, without any negative impact on the properties of the fibres
CitationOliver-Ortega, H., Alberto Méndez, J., Mutjé, P., Tarrés, Q., Espinach, F.X, Ardanuy, M. Evaluation of thermal and thermomechanical behaviour of bio-based polyamide 11 based composites reinforced with lignocellulosic fibres. "Polymers", 18 Octubre 2017, vol. 9, núm. 10 (522).
URIhttp://hdl.handle.net/2117/109127
DOI10.3390/polym9100522
ISSN2073-4360
Publisher versionhttp://www.mdpi.com/2073-4360/9/10/522
Collections
Share: