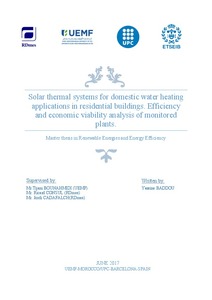 Climate change and energy have become the trend of universal discussions in the recent years. It is true that the use of conventional fossil fuels negatively affects our planet, hence the whole renewable energy movements. However, at the current state, the world still cannot be entirely reliant on renewable energies for its needs. On the other hand, utilizing the maximum renewable energy opportunities would have a positive impact on climate change. Many forms of renewable energy can be exploited, wind energy, tidal energy, sun energy and so on. The most common renewable energy is solar energy, it can be used for various ends (electricity generation by photovoltaic/thermal power plants, domestic water heating…). Governments around the world encourage the use of solar domestic water heating, for it’s simple usage, low maintenance requirements and efficiency of the solar heating systems. The Spanish government approved a law in March of 2006, named “Código Técnico de la Edificación”. This regulation is mandatory, and set the minimum quality requirements that residential buildings must have. One of them forces that new and renovated buildings have to produce part the energy demand for heating water by means of a solar thermal system. The aim of this work is to study a domestic solar water heating system in a residential building, to develop a numerical model based on the f-chart method by William Beckman and John Duffie, in order to predict thermal behavior of the solar system and compare the results with real data collected from the solar system using an energy counter called SunEye. The solar system chosen for this study is located in Terrassa-Barcelona, it provides hot water for a residential building of 17 apartments. The solar system is composed of 8 solar collectors with 17 storage tanks (10 of 100L and 7 of 150). The Data collected from this solar system using SunEye will be downloaded from RDmes company cloud server named OMNILUS. An overview of the 12 monitor plants by this company from an energy, CO2 reduction and money saves point of view will be reviewed.
SubjectsDwellings -- Energy consumption, Solar thermal energy, Habitatges -- Consum d'energia, Energia tèrmica solar
URIhttp://hdl.handle.net/2117/109091