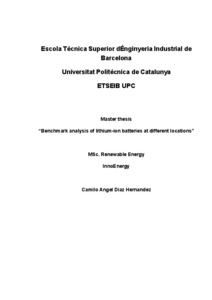 Document typeMaster thesis
Rights accessOpen Access
Abstract
The present document aims to analyze different types of Lithium-ion (Li-ion) batteries and define which type is more suitable for a specific location, regarding the SOH (State of Health) value after one year of operation. Three batteries have been chosen for this comparison, each one having a different performance according with mathematical models with different parameters. Two models are based in the Lithium Iron Phosphate (LiFePO4) chemistry; with the difference that the Model 3 uses a carbon coated LiFePO4. The model 2 is based on the Lithium Manganese Nickel Oxide (LiNiMnCoO2, known as NMC) chemistry. These models were selected based on the existing studies available in the literature (many models have been developed for these types of Li-ion), and most importantly, the LiFePO4 used to be the most used type of battery for electrical vehicles and nowadays the NMC is becoming the new trend. LiFePO4 is used in many electric cars manufactured in China and NMC is a type used in very popular brands such as Tesla. For each one of the models, the SOH calculation is presented and each equation is developed according with the temperatures at three different locations: Oslo, Norway; Barcelona, Spain and New Jersey in the US. For these places, the temperatures were considered and configured into the models. The trail period was a year, and as the temperatures were for the year 2016, the total cycle number was set to 366. Results showed that the temperature plays a significant role in terms of the SOH rate of change per cycle. Even though the final SOH value is not significantly changing for the same model at different location, the set of values that the SOH takes is totally different. After analyzing the graphs obtained, a modification was followed in order to consider the real cases, where the mileage driven is not constant and is different at the three locations. Then a higher difference in the SOH was identified comparing each place. At the end, a market analysis is presented in order to estimate the annualized cost at each place for each one of the three models. The cost-benefit is also a key indicator while making the decision of the most suitable battery. It can be concluded that using a battery outside the optimal temperature value then can decrease its lifetime in the range of 1 to 3% only due to this variable.
SubjectsLithium ion batteries, Bateries d'ió liti
URIhttp://hdl.handle.net/2117/109080
Collections
Share: