Changes in bacteria composition and efficiency of constructed wetlands under sustained overloads: a modeling experiment 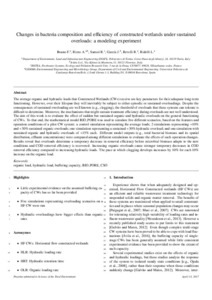 Except where otherwise noted, content on this work is licensed under a Creative Commons license : Attribution-NonCommercial-NoDerivs 3.0 Spain
ProjectECO.G.U.S. - ECOsystem services for resilient and sustainable cities: an ecohydrological approach for Green Urban Spaces (EC-H2020-701914)
Abstract
The average organic and hydraulic loads that Constructed Wetlands (CWs) receive are key parameters for their adequate long-term functioning. However, over their lifespan they will inevitably be subject to either episodic or sustained overloadings. Despite that the consequences of sustained overloading are well known (e.g., clogging), the threshold of overloads that these systems can tolerate is difficult to determine. Moreover, the mechanisms that might sustain the buffering capacity (i.e., the reduction of peaks in nutrient load) during overloads are not well understood. The aim of this work is to evaluate the effect of sudden but sustained organic and hydraulic overloads on the general functioning of CWs. To that end, the mathematical model BIO_PORE was used to simulate five different scenarios, based on the features and operation conditions of a pilot CW system: a control simulation representing the average loads; 2 simulations representing +10% and +30% sustained organic overloads; one simulation representing a sustained +30% hydraulic overload; and one simulation with sustained organic and hydraulic overloads of +15% each. Different model outputs (e.g., total bacterial biomass and its spatial distribution, effluent concentrations) were compared among different simulations to evaluate the effects of such operation changes. Results reveal that overloads determine a temporary decrease in removal efficiency before microbial biomass adapts to the new conditions and COD removal efficiency is recovered. Increasing organic overloads cause stronger temporary decreases in COD removal efficiency compared to increasing hydraulic loads. The pace at which clogging develops increases by 10% for each 10% increase on the organic load.
CitationBoano, F., Rizzo, A., Samsó, R., Garcia, J., Revelli, R., Ridolfi, L. Changes in bacteria composition and efficiency of constructed wetlands under sustained overloads: a modeling experiment. "Science of the total environment", Gener 2018, vol. 612, p. 1480-1487.
URIhttp://hdl.handle.net/2117/109062
DOI10.1016/j.scitotenv.2017.08.265
ISSN0048-9697
Publisher versionhttp://www.sciencedirect.com/science/article/pii/S0048969717322878
Collections
Share: