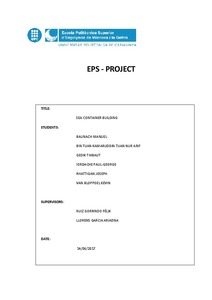 CovenanteeNeàpolis
Document typeBachelor thesis
Rights accessOpen Access
Abstract
Sea containers are used globally for shipping and have been for over 60 years, there are millions of them worldwide sitting unused in ports, recently individuals and businesses are realising the potential of this and using them to construct permanent buildings faster and cheaper than traditional buildings. Neàpolis, an innovation agency situated in Vilanova i la Geltrú identified the potential of sea container for a new business property. The present report details the project “Sea Container Building” during the European Project Semester 2017, completed by six international students at Escola Politècnica Superior d’Enginyeria de Villanova i la Geltrú (EPSEVG) in cooperation with Neàpolis Neàpolis encountered a problem due to a lack of space to expand their business so they announced the above-mentioned project. The task given to the team was to design, analyse and plan a new multipurpose building using sea containers as the primary building material which should be constructed on the site next to the main Neàpolis headquarters. First of all, general information about sea containers and existing sea container buildings was researched. Secondly the requirements set by Neàpolis were written down. The new construction must consist of a cowork office space, a maker space, a bar/café and an exhibition hall offering space for at least 30 people altogether. Thirdly the building site is examined and the urban regulations are analysed. At present the plot is qualified as a Green Zone, thus it is not allowed to build. However solutions to change this circumstance exist and should not limit the project. Followed by various research about the climate and eco aspects which led to several exterior design concepts which were then refined into a final design and agreed upon by all stakeholders. Based on the design and the plot characteristics a foundation type was chosen and the sewage piping was planned. At the same time as the exterior finishing the interior layout started in close relation with each other. Floor plans and electrical plans are created. Furniture is chosen and the interior layout is completed. Furthermore the construction process is planned to estimate the construction time and compare it to a classic concrete building. Over the whole planning the costs are monitored and calculated with estimated and researched numbers for each element to give as precise a total cost estimation as possible and to also compare it to classic concrete buildings like the construction time. A conclusion and an outlook (list of next steps) are completing this report.
Description
Treball desenvolupat dins el marc del programa 'European Project Semester' i l' "International Design Project Semester".
SubjectsIndustrial design, Containers -- Design and construction, Disseny industrial, Contenidors -- Disseny i construcció
DegreeGRAU EN ENGINYERIA MECÀNICA (Pla 2009)
Location
1: Vilanova i la Geltrú, Barcelona, Espanya
URIhttp://hdl.handle.net/2117/108963
Collections
Share: