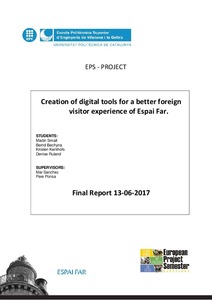 Except where otherwise noted, content on this work is licensed under a Creative Commons license : Attribution-NonCommercial-NoDerivs 3.0 Spain
Abstract
This document will explore a research which have been done for a museum located in Vilanova I La Getru, Catalonia, Spain. The museum is called Espai Far, what stands for Lighthouse space. Espai Far approached UPC to find a team of international students for doing research and for identifying the approaches the museum needs, to increase the users experience. The team is a group of international designers and engineers on an international design semester, each possessing skills and attributes which will be essential for the completion of this project. Espai Far shows the richness of Vilanova’s maritime inheritance. The Espai Far has three exhibition spaces and opened in July, 2016. The project began at the beginning of February 2017. The team fist got introduced with the museum itself. The first thing which got clear was that al the information was only available in Catalan, besides that the museum has limited space which leaves no room for translation in other languages. The main goal for this project is to improve the visitors’ experience. Firstly, the team wanted to know who are the visitors of Espai Far? Therefore, the team decided to do research on the visitors’ experience, the number of visitors and their origins. With the answers which are provided from this surveys, it became clear for the team which further steps have to be taken. In collaboration with the supervisors there has be agreed on the next steps: • Create new digital tools o Webpage For the most effective template the team did research which can be found in chapter seven. This chapter shows some examples and mock-ups about the final website. Unfortunate the team was not able to create a working webpage and the webpage is now still under construction. o Promotion video´s The team made as well a promotion video with several pictures about Espai Far. In the video shows about the three different parts of the museum, the collaboration with schools and about other activities they organise. The video can be used on the webpage of Espai Far or for instance on social media. Besides the webpage and the promotion videos the team decided to create four more digital tools. First, the team created a navigation video, which shows the route from the train station in Vilanova to Espai Far. In the video shows pictures, street names and recognition sites. Second, panoramic pictures of the museum. Third, the use of QR-codes. Fourth, surveys on GoogleDocs. • Translate the most important information about the museum, which can be placed on the new webpage: The most important information is translated in multiple languages Spanish, English, French and Dutch. • Research on marketing purpose: To discover how Espai far can improve the visitors experience as well, the team did research on the marketing approach of Espai Far. The team had an interview with Mar Sanchez, the director of Espai Far about the actual situation of Espai Far. Besides that, the team also took interviews with other museums as well to compare their strategies with Espai Far’s. • Improve the interactivity in the museum: Interactivity in the museum is also a part of the user experience, that´s why the team invented some interactive ideas for Espai Far. These ideas can be found in chapter 6.2.
Description
Treball desenvolupat dins el marc del programa 'European Project Semester'.
SubjectsWeb-based user interfaces, Aplicacions web, Museus
DegreeMOBILITAT INCOMING
URIhttp://hdl.handle.net/2117/108962
Collections
Share: