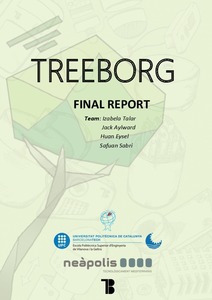 Except where otherwise noted, content on this work is licensed under a Creative Commons license : Attribution-NonCommercial-NoDerivs 3.0 Spain
Abstract
The aim of this report is to present the work of the Treeborg team over the time of the European Project Semester (EPS), on the project of analysing the possibility of implementing the electrical device in the tree that would be powered by the energy coming from the nature. Firstly, the report begins with an introduction where the aim and purpose of the report are stated. The main companies involved in the project are introduced and their main goals. Secondly, it describes the method of harvesting the energy from the process of photosynthesis. BIOO’s technology is explained and their solution for a natural source of energy is investigated. Next, the advantages and disadvantages of implementing the device inside and outside the tree are pointed out and the comparison between them is conducted. The final conclusion is that in the further part of the report only the internal implementation is considered. The electronical part of the project is presented as following. Each part of the electronic module is developed and explained. All components of the device are described and depicted. Also, the final code of the device is shown. In the further part of the report, the implementation into the tree is described and the methodology. The least harmful way had to be chosen to guarantee that the tree will survive the operation. The possible impact on the tree is also considered. As the main part of the report, the design of the device is elaborated. Starting with the initial concepts that were created at the beginning of the semester, to the final selection that is thoroughly described and depicted. Both internal and external parts are presented. At the end, possible improvements and the material to be used are described. The problems faced with time limitation and technical aspects are mentioned. Also, the possibilities for the future are described. The possibility of using the device in a smart city is justified and the other uses of the idea are presented. Moreover, the improved electronic system is described. As one of the last points, the marketing strategy is considered. The basic profile of the customer is created and the market analysis is conducted. The basic cost calculation is made and displayed in a form of a table. The afterlife of the device and possible business partners are also considered. Lastly, the discussion on the project itself is made and finishes with final conclusions.
Description
Treball desenvolupat dins el marc del programa 'European Project Semester' i l'"International Design Project Semester".
SubjectsEnergy harvesting, Photosynthesis, Fotosíntesi, Energia -- Estalvi
DegreeGRAU EN ENGINYERIA ELECTRÒNICA INDUSTRIAL I AUTOMÀTICA (Pla 2009)
URIhttp://hdl.handle.net/2117/108868
Collections
Share: