Instruction sets want to be free 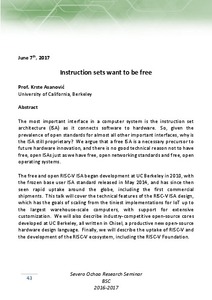 Show full item record
Asanović, Krste
Document typeConference report
PublisherBarcelona Supercomputing Center
Rights accessOpen Access
Abstract
The most important interface in a computer system is the instruction set architecture (ISA) as it connects software to hardware. So, given the prevalence of open standards for almost all other important interfaces, why is the ISA still proprietary? We argue that a free ISA is a necessary precursor to future hardware innovation, and there is no good technical reason not to have free, open ISAs just as we have free, open networking standards and free, open operating systems. The free and open RISC-V ISA began development at UC Berkeley in 2010, with the frozen base user ISA standard released in May 2014, and has since then seen rapid uptake around the globe, including the first commercial shipments. This talk will cover the technical features of the RISC-V ISA design, which has the goals of scaling from the tiniest implementations for IoT up to the largest warehouse-scale computers, with support for extensive customization. We will also describe industry-competitive open-source cores developed at UC Berkeley, all written in Chisel, a productive new open-source hardware design language. Finally, we will describe the uptake of RISC-V and the development of the RISC-V ecosystem, including the RISC-V Foundation.
CitationAsanović, K. Instruction sets want to be free. A: 3rd Severo Ochoa Research Seminar Lectures at BSC, Barcelona, 2016-2017. "Book of abstracts". Barcelona: Barcelona Supercomputing Center, 2017, p. 43-44.
URIhttp://hdl.handle.net/2117/108837
Collections
Share: