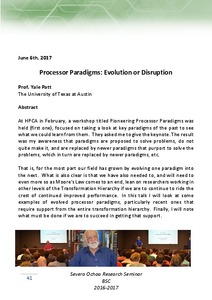 Except where otherwise noted, content on this work is licensed under a Creative Commons license : Attribution-NonCommercial-NoDerivs 3.0 Spain
Abstract
At HPCA in February, a workshop titled Pioneering Processor Paradigms was held (first one), focused on taking a look at key paradigms of the past to see what we could learn from them. They asked me to give the keynote. The result was my awareness that paradigms are proposed to solve problems, do not quite make it, and are replaced by newer paradigms that purport to solve the problems, which in turn are replaced by newer paradigms, etc. That is, for the most part our field has grown by evolving one paradigm into the next. What is also clear is that we have also needed to, and will need to even more so as Moore's Law comes to an end, lean on researchers working in other levels of the Transformation Hierarchy if we are to continue to ride the crest of continued improved performance. In this talk I will look at some examples of evolved processor paradigms, particularly recent ones that require support from the entire transformation hierarchy. Finally, I will note what must be done if we are to succeed in getting that support.
CitationPatt, Y. Processor paradigms: evolution or disruption. A: 3rd Severo Ochoa Research Seminar Lectures at BSC, Barcelona, 2016-2017. "Book of abstracts". Barcelona: Barcelona Supercomputing Center, 2017, p. 41-42.
URIhttp://hdl.handle.net/2117/108836
Collections
Share: