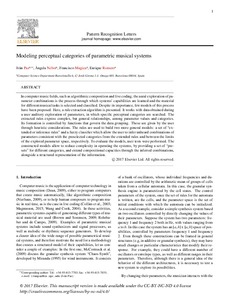 Document typeArticle
PublisherElsevier
Rights accessOpen Access
Abstract
In computer music fields, such as algorithmic composition and live coding, the aural exploration of parameter combinations is the process through which systems’ capabilities are learned and the material for different musical tasks is selected and classified. Despite its importance, few models of this process have been proposed. Here, a rule extraction algorithm is presented. It works with data obtained during a user auditory exploration of parameters, in which specific perceptual categories are searched. The extracted rules express complex, but general relationships, among parameter values and categories. Its formation is controlled by functions that govern the data grouping. These are given by the user through heuristic considerations. The rules are used to build two more general models: a set of “extended or Inference Rules” and a fuzzy classifier which allow the user to infer unheard combinations of parameters consistent with the preselected categories from the extended rules and between the limits of the explored parameter space, respectively. To evaluate the models, user tests were performed. The constructed models allow to reduce complexity in operating the systems, by providing a set of “presets” for different categories, and extend compositional capacities through the inferred combinations, alongside a structured representation of the information.
CitationPaz-Ortiz, I., Nebot, M., Múgica, F., Romero, E. Modeling perceptual categories of parametric musical systems. "Pattern recognition letters", Abril 2018, vol. 105, p. 217-225.
URIhttp://hdl.handle.net/2117/108829
DOI10.1016/j.patrec.2017.07.005
ISSN0167-8655
Publisher versionhttp://www.sciencedirect.com/science/article/pii/S0167865517302374?via%3Dihub
Collections
Share: