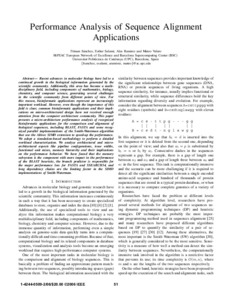 Document typeConference report
PublisherInstitute of Electrical and Electronics Engineers (IEEE)
Rights accessOpen Access
Abstract
Advances in molecular biology have led to a continued growth in the biological information generated by the scientific community. Additionally, this area has become a multi-disciplinary field, including components of mathematics, biology, chemistry, and computer science, generating several challenges in the scientific community from different points of view. For this reason, bioinformatic applications represent an increasingly important workload. However, even though the importance of this field is clear, common bioinformatic applications and their implications on micro-architectural design have not received enough attention from the computer architecture community. This paper presents a micro-architecture performance analysis of recognized bioinformatic applications for the comparison and alignment of biological sequences, including BLAST, FASTA and some recognized parallel implementations of the Smith-Waterman algorithm that use the Altivec SIMD extension to speed-up the performance. We adopt a simulation-based methodology to perform a detailed workload characterization. We analyze architectural and micro-architectural aspects like pipeline configurations, issue widths, functional unit mixes, memory hierarchy and their implications on the performance behavior. We have found that the memory subsystem is the component with more impact in the performance of the BLAST heuristic, the branch predictor is responsible for the major performance loss for FASTA and SSEARCH34, and long dependency chains are the limiting factor in the SIMD implementations of Smith-Waterman.
CitationSánchez, F., Salamí, E., Ramírez, A., Valero, M. Performance analysis of sequence alignment applications. A: IEEE International Symposium on Workload Characterization. "Proceedings of the 2006 IEEE International Symposium on Workload Characterization: IISWC-2006: October 25-27, 2006 San Jose, California". San Jose, CA: Institute of Electrical and Electronics Engineers (IEEE), 2006, p. 51-60.
URIhttp://hdl.handle.net/2117/108796
DOI10.1109/IISWC.2006.302729
ISBN1-4244-0508-4
Publisher versionhttp://ieeexplore.ieee.org/document/4086133/
Collections
Share: