Do we all really know what a fog node is? Current trends towards an open definition 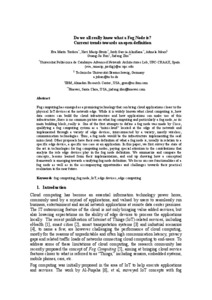 Jukan, Admela
Ren, Guang-Jie
Zhu, Jiafeng
Document typeArticle
Rights accessOpen Access
Abstract
Fog computing has emerged as a promising technology that can bring cloud applications closer to the physical IoT devices at the network edge. While it is widely known what cloud computing is, how data centers can build the cloud infrastructure and how applications can make use of this infrastructure, there is no common picture on what fog computing and particularly a fog node, as its main building block, really is. One of the first attempts to define a fog node was made by Cisco, qualifying a fog computing system as a “mini-cloud” located at the edge of the network and implemented through a variety of edge devices, interconnected by a variety, mostly wireless, communication technologies. Thus, a fog node would be the infrastructure implementing the said mini-cloud. Other proposals have their own definition of what a fog node is, usually in relation to a specific edge device, a specific use case or an application. In this paper, we first survey the state of the art in technologies for fog computing nodes, paying special attention to the contributions that analyze the role edge devices play in the fog node definition. We summarize and compare the concepts, lessons learned from their implementation, and end up showing how a conceptual framework is emerging towards a unifying fog node definition. We focus on core functionalities of a fog node as well as in the accompanying opportunities and challenges towards their practical realization in the near future.
CitationMarin, E., Masip, X., Garcia, J., Jukan, A., Ren, G., Zhu, J. Do we all really know what a fog node is? Current trends towards an open definition. "Computer communications", 1 Setembre 2017, vol. 109, p. 117-130.
URIhttp://hdl.handle.net/2117/108773
DOI10.1016/j.comcom.2017.05.013
ISSN0140-3664
Publisher versionhttp://www.sciencedirect.com/science/article/pii/S0140366416307113?via%3Dihub
Collections
Share: