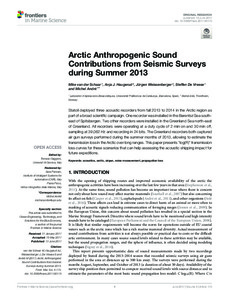 Document typeArticle
Rights accessOpen Access
Abstract
Statoil deployed three acoustic recorders from fall 2013 to 2014 in the Arctic region as part of a broad scientific campaign. One recorder was installed in the Barentsz Sea south-east of Spitsbergen. Two other recorders were installed in the Greenland Sea north-east of Greenland. All recorders were operating at a duty cycle of 2 min on and 30 min off, sampling at 39,062 Hz and recording in 24 bits. The Greenland recorders both captured air gun surveys performed during the summer months of 2013, allowing to estimate the transmission loss in the Arctic over long ranges. This paper presents “log(R)” transmission loss curves for these scenarios that can help assessing the acoustic shipping impact for future expeditions.
URIhttp://hdl.handle.net/2117/108729
DOI10.3389/fmars.2017.00175
ISSN2296-7745
Publisher versionhttp://journal.frontiersin.org/article/10.3389/fmars.2017.00175/full
Collections
Share: