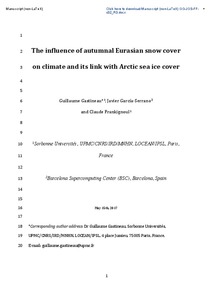 The influence of autumnal Eurasian snow cover on climate and its link with Arctic sea ice cover.pdf (6,629Mb)
Share:

Show full item record
Gastineau, Guillaume
García-Serrano, Javier
Frankignoul, Claude
Document typeArticle
PublisherAmerican Meteorological Society
Rights accessOpen Access
European Commission's projectDPETNA - Dynamics and Predictability of the ENSO teleconnection to the Tropical North Atlantic (EC-H2020-655339)
Abstract
The relationship between Eurasian snow cover extent (SCE) and Northern Hemisphere atmospheric circulation is studied in reanalysis during 1979–2014 and in CMIP5 preindustrial control runs. In observations, dipolar SCE anomalies in November, with negative anomalies over eastern Europe and positive anomalies over eastern Siberia, are followed by a negative phase of the Arctic Oscillation (AO) one and two months later. In models, this effect is largely underestimated, but four models simulate such a relationship. In observations and these models, the SCE influence is primarily due to the eastern Siberian pole, which is itself driven by the Scandinavian pattern (SCA), with a large anticyclonic anomaly over the Urals. The SCA is also responsible for a link between Eurasian SCE anomalies and sea ice concentration (SIC) anomalies in the Barents–Kara Sea. Increasing SCE over Siberia leads to a local cooling of the lower troposphere and is associated with warm conditions over the eastern Arctic. This is followed by a polar vortex weakening in December and January, which has an AO-like signature. In observations, the association between November SCE and the winter AO is amplified by SIC anomalies in the Barents–Kara Sea, where large diabatic heating of the lower troposphere occurs, but results suggest that the SCE is the main driver of the AO. Conversely, the sea ice anomalies have little influence in most models, which is consistent with the different SCA variability, the colder mean state, and the underestimation of troposphere–stratosphere coupling simulated in these models.
CitationGastineau, G.; García-Serrano, J.; Frankignoul, C. The Influence of Autumnal Eurasian Snow Cover on Climate and Its Link with Arctic Sea Ice Cover. "Journal of Climate", Agost 2017, vol. 30, núm. 19, p. 7599-7619.
URIhttp://hdl.handle.net/2117/108645
DOI10.1175/JCLI-D-16-0623.1
ISSN0894-8755
Publisher versionhttp://journals.ametsoc.org/doi/abs/10.1175/JCLI-D-16-0623.1
Collections
Share: