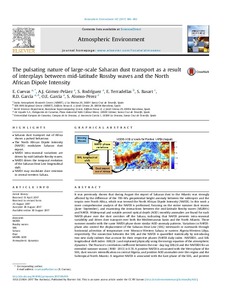 The pulsating nature of large-scale Saharan dust transport as a result.pdf (11,24Mb)
Share:

Except where otherwise noted, content on this work is licensed under a Creative Commons license : Attribution-NonCommercial-NoDerivs 4.0 Spain
Abstract
It was previously shown that during August the export of Saharan dust to the Atlantic was strongly affected by the difference of the 700-hPa geopotential height anomaly between the subtropics and the tropics over North Africa, which was termed the North African Dipole Intensity (NAFDI). In this work a more comprehensive analysis of the NAFDI is performed, focusing on the entire summer dust season (June–September), and examining the interactions between the mid-latitude Rossby waves (MLRWs) and NAFDI. Widespread and notable aerosol optical depth (AOD) monthly anomalies are found for each NAFDI-phase over the dust corridors off the Sahara, indicating that NAFDI presents intra-seasonal variability and drives dust transport over both the Mediterranean basin and the North Atlantic. Those summer months with the same NAFDI-phase show similar AOD-anomaly patterns. Variations in NAFDI-phase also control the displacement of the Saharan Heat Low (SHL) westwards or eastwards through horizontal advection of temperature over Morocco-Western Sahara or eastern Algeria-Western Libya, respectively. The connection between the SHL and the NAFDI is quantified statistically by introducing two new daily indexes that account for their respective phases (NAFDI daily index -NAFDIDI-, and SHL longitudinal shift index -SHLLSI-) and explained physically using the energy equation of the atmospheric dynamics. The Pearson's correlation coefficient between the one–day-lag SHLLSI and the NAFDIDI for an extended summer season (1980–2013) is 0.78. A positive NAFDI is associated with the West-phase of the SHL, dust sources intensification on central Algeria, and positive AOD anomalies over this region and the Subtropical North Atlantic. A negative NAFDI is associated with the East-phase of the SHL, and positive AOD anomalies over central-eastern Sahara and the central-western Mediterranean Sea. The results point out that the phase changes of NAFDI at intra-seasonal time scale are conducted by those MLRWs that penetrate deeply into the low troposphere.
CitationCuevas, E. [et al.]. The pulsating nature of large-scale Saharan dust transport as a result of interplays between mid-latitude Rossby waves and the North African Dipole Intensity. "Atmospheric Environment", Octubre 2017, vol. 167, p. 586-602.
URIhttp://hdl.handle.net/2117/108640
DOI10.1016/j.atmosenv.2017.08.059
ISSN1352-2310
Publisher versionhttp://www.sciencedirect.com/science/article/pii/S1352231017305757
Collections
Share: