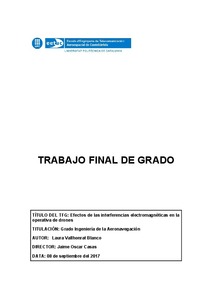 Companies that work with drones often encounter electromagnetic compatibility problems when flying near communication antennas. This document aims to characterize and measure the type of waves that cause interferences and find methods to avoid or mitigate these effects. In the first place, a fieldwork has been made by using a UAV (Unmanned Aerial Vehicle) propriety of the company we have collaborated with (HEMAV). This study consists of testing the behavior of the drone in critical situations, like flying near antennas that emit medium or high power density values and over a wide range of frequencies. These cases are easily founded in normal flight operations. Once measurements have been obtained, the UAV memory will be studied in order to find a more accurate density value. With these tests, it is tried to find the minimum limit of power density and their respective frequencies in which the drone begins to show failures. After obtaining this range of power densities and frequencies, a second test will be carried out. This second test will be done in a controlled environment, an anechoic chamber. Once the test has been done a table will be generated showing the frequencies related to the maximum power densities accepted by the UAV. Taking into account that under normal conditions the polarization of the antennas cannot be detected the tests will be run under the worst condition. To conclude, a tool has been designed to be used in case a Yagi antenna is located near the drone. Moreover, the tool has been designed to easily adapt it to other types of antennas. Once the tool is calibrated, it delivers the maximum horizontal distance to which the UAV can be approached so as not to enter into the critical zone. Several solutions are also suggested which, in case of implementation, can mitigate the effects of electromagnetic interferences.
SubjectsDrone aircraft, Electromagnetic interference, Avions no tripulats, Interferència electromagnètica
URIhttp://hdl.handle.net/2117/108590