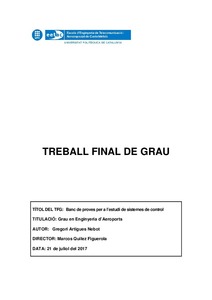 Salvo que se indique lo contrario, los contenidos de esta obra estan sujetos a la licencia de Creative Commons : Reconocimiento-NoComercial-CompartirIgual 3.0 España
Resumen
Testing platform for the study of control systems The following final project consists in the study and elaboration of a testing platform for the study of control systems. We will have to build a real system to control that will allow us to take real-time empirical data if necessary for their characterization. Specifically, the system that has been designed by the project is a rocker prototype with an engine and a helix. The studied plant is based on a bar that has the freedom to rotate around a horizontal axis that describes a movement that is contained in the vertical plane. This is achieved thanks to the lifting force that generates the helix in a viscous fluid such as air. The helix is connected to a DC motor and both are embedded at one end of the moving bar. By varying the speed of rotation of the helix, it is possible to vary the force it generates and, consequently, the angle that forms the position of the bar relative to the vertical. You can measure the position or the angle with a potentiometer coupled to the axis of rotation that depending on the resistance that generates, the passage of the current will be related to a specific angle. Next, the integration of data and the control of the system is carried out in the simulation environment of the Labview program. In this, a Proportional Integral Derivative (PID) control is designed to be tuned and will allow control the motor's rotation speed and use the angle measurement to control the position of the system. As an interconnection platform between the system and the PC, an Arduino UNO microcontroller has been used with the extension of LINX Makerhub and a motor driver for the control of the actuator. A theoretical study of the real plant will be carried out to create a mathematical model that emulates the behavior of the real system. Once you have it, a simulated plant module is created in the programming environment with which you can tune in the controller. The values of the control variables obtained with the tuning of the control system based on the simulated and the real plant are compared.
MateriasCost control, Cost -- Control, Planificació estratègica
TitulaciónGRAU EN ENGINYERIA D'AEROPORTS (Pla 2010)
URIhttp://hdl.handle.net/2117/108589
Colecciones
Comparte: