Performance impact of the grid middleware 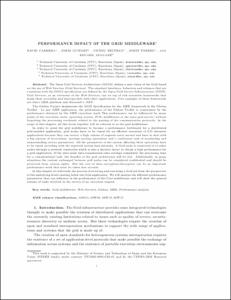 Document typePart of book or chapter of book
PublisherAmerican Scientific Publishers
Rights accessOpen Access
Abstract
The Open Grid Services Architecture (OGSA) defines a new vision of the Grid based on the use of Web Services (Grid Services). The standard interfaces, behaviors and schemes that are consistent with the OGSA specification are defined by the Open Grid Service Infrastructure (OGSI). Grid Services, as an extension of the Web Services, run on top of rich execution frameworks that make them accessible and interoperable with other applications. Two examples of these frameworks are Sun’s J2EE platform and Microsoft’s .NET. The Globus Project implements the OGSI Specification for the J2EE framework in the Globus Toolkit. As any J2EE application, the performance of the Globus Toolkit is constrained by the performance obtained by the J2EE execution stack This performance can be influenced by many points of the execution stack: operating system, JVM, middleware or the same grid service, without forgetting the processing overheads related to the parsing of the communication protocols. In the scope of this chapter, all this levels together will be referred to as the grid middleware. In order to avoid the grid middleware to become a performance bottleneck for a distributed grid-enabled application, grid nodes have to be tuned for an efficient execution of I/O intensive applications because they can receive a high volume of requests every second and have to deal with a big amount of invocations, message parsing operations and a continuous task of marshaling and unmarshalling service parameters. All the parameters of the system affecting these operations have to be tuned according with the expected system load intensity. A Grid node is connected to to other nodes through a network connection which is also a decisive factor to obtain a high performance for a grid application. If the inter-node data transmission time overlaps completely the processing time for a computational task, the benefits of the grid architecture will be lost. Additionally, in many situations the content exchanged between grid nodes can be considered confidential and should be protected from curious sights. But the cost of data encryption/decryption can be an important performance weak that must be taken into account. In this chapter we will study the process of receiving and executing a Grid job from the perspective of the underlying levels existing below the Grid application. We will analyze the different performance parameters that can influence in the performance of the Grid middleware and will show the general schema of tasks involved in the service of an execution request.
CitationCarrera, D. [et al.]. Performance impact of the grid middleware. A: "Engineering the grid: status and perspective". American Scientific Publishers, 2006, p. 235-249.
URIhttp://hdl.handle.net/2117/10848
ISBN1-58883-038-1
Collections
Share: