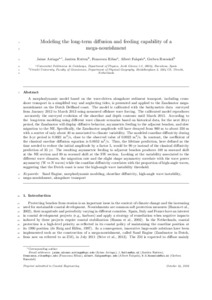 A morphodynamic model based on the wave-driven alongshore sediment transport, including cross-shore transport in a simplified way and neglecting tides, is presented and applied to the Zandniotor mega-nourishment on the Dutch Delfiand coast. The model is calibrated with the bathymetric data surveyed from January 2012 to March 2013 using measured offshore wave forcing. The calibrated model reproduces accurately the surveyed evolution of the shoreline and depth contours until March 2015. According to the long-term modeling using different wave climate scenarios based on historical data, for the next 30-yr period, the Zandmotor will display diffusive behavior, asymmetric feeding to the adjacent beaches, and slow Migration to the NE. Specifically, the Zandmotor amplitude will have decayed from 960 m to about 350 m with a scatter of only about 40 m associated to climate variability. The modeled coastline diffusivity during the 3-yr period is 0.0021 m(2)/s, close to the observed value of 0.0022 m(2)/s. In contrast, the coefficient of the classical one-line diffusion equation is 0.0052 m(2)/s. Thus, the lifetime prediction, here defined as the time needed to reduce the initial amplitude by a factor 5, would be 90 yr instead of the classical diffusivity prediction of 35 yr. The resulting asymmetric feeding to adjacent beaches prodtices 100 m seaward shift at the NE section and 80 m seaward shift at the SW section. Looking at the variability associated to the different wave climates, the migration rate and the slight shape asymmetry correlate with the wave power asymmetry (W vs N waves) while the coastline diffusivity correlates with the proportion of high-angle waves, suggesting that the Dutch coast is near the high-angle wave instability threshold.
CitationArriaga, J., Rutten, J., Ribas, F., Falques, A., Ruessink, B. Modeling the long-term diffusion and feeding capability of a mega-nourishment. "Coastal engineering", 1 Març 2017, vol. 121, p. 1-13.
URIhttp://hdl.handle.net/2117/108377
DOI10.1016/j.coastaleng.2016.11.011
ISSN0378-3839
Publisher versionhttp://www.sciencedirect.com/science/article/pii/S0378383916303659