Recognition of a territory: the forgotten cultural heritage of Bogotá’s villages 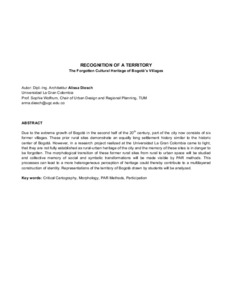 Except where otherwise noted, content on this work is licensed under a Creative Commons license : Attribution-NonCommercial-NoDerivs 3.0 Spain
Abstract
Due to the extreme growth of Bogotá in the second half of the 20th century, part of the city now consists of six former villages. These prior rural sites demonstrate an equally long settlement history similar to the historic center of Bogotá. However, in a research project realized at the Universidad La Gran Colombia came to light, that they are not fully established as rural-urban heritage of the city and the memory of these sites is in danger to be forgotten. The morphological transition of these former rural sites from rural to urban space will be studied and collective memory of social and symbolic transformations will be made visible by PAR methods. This processes can lead to a more heterogeneous perception of heritage could thereby contribute to a multilayered construction of identity. Representations of the territory of Bogotá drawn by students will be analyzed.
Location
1: La Catedral, Bogotá, Bogota, Colòmbia
CitationDiesch, A. Recognition of a territory: the forgotten cultural heritage of Bogotá’s villages. A: Seminario Internacional de Investigación en Urbanismo. "IX Seminario Internacional de Investigación en Urbanismo, Barcelona-Bogotá, Junio 2017". Barcelona: DUOT, 2017.
URIhttp://hdl.handle.net/2117/108335
DOI10.5821/siiu.6405
DLB-15.590-2013
ISSN2385-7714
Collections
Share: