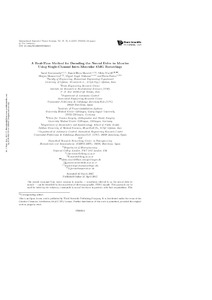 Farina, Dario
Document typeArticle
Rights accessOpen Access
Abstract
The neural command from motor neurons to muscles — sometimes referred to as the neural drive to muscle — can be identified by decomposition of electromyographic (EMG) signals. This approach can be used for inferring the voluntary commands in neural interfaces in patients with limb amputations. This paper proposes for the first time an innovative method for fully automatic and real-time intramuscular EMG (iEMG) decomposition. The method is based on online single-pass density-based clustering and adaptive classification of bivariate features, using the concept of potential measure. No attempt was made to resolve superimposed motor unit action potentials. The proposed algorithm was validated on sets of simulated and experimental iEMG signals. Signals were recorded from the biceps femoris long-head, vastus medialis and lateralis and tibialis anterior muscles during low-to-moderate isometric constant-force and linearly-varying force contractions. The average number of missed, duplicated and erroneous clusters for the examined signals was 0.5±0.80.5±0.8, 1.2±1.01.2±1.0, and 1.0±0.81.0±0.8, respectively. The average decomposition accuracy (defined similar to signal detection theory but without using True Negatives in the denominator) and coefficient of determination (variance accounted for) for the cumulative discharge rate estimation were 70±9%70±9%, and 94±5%94±5%, respectively. The time cost for processing each 200ms iEMG interval was 43±1643±16 (21–97)ms. However, computational time generally increases over time as a function of frames/signal epochs. Meanwhile, the incremental accuracy defined as the accuracy of real-time analysis of each signal epoch, was 74±1874±18% for epochs recorded after initial one second. The proposed algorithm is thus a promising new tool for neural decoding in the next-generation of prosthetic control.
CitationKarimimehr, S., Marateb, H.R., Muceli, S., Mansourian, M., Mañanas, M.A., Farina, D. A real-time method for decoding the neural drive to muscles using single-channel intra-muscular EMG recordings. "International journal of neural systems", 1 Setembre 2017, vol. 27, núm. 6, p. 1-18.
URIhttp://hdl.handle.net/2117/108320
DOI10.1142/S0129065717500253
ISSN0129-0657
Publisher versionhttp://www.worldscientific.com/doi/abs/10.1142/S0129065717500253
Collections
Share: