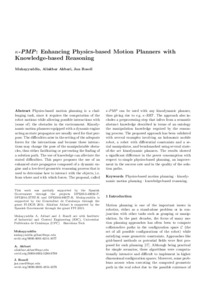 Document typeArticle
Rights accessOpen Access
Abstract
Physics-based motion planning is a challenging task, since it requires the computation of the robot motions while allowing possible interactions with (some of) the obstacles in the environment. Kinodynamic motion planners equipped with a dynamic engine acting as state propagator are usually used for that purpose. The difficulties arise in the setting of the adequate forces for the interactions and because these interactions may change the pose of the manipulatable obstacles, thus either facilitating or preventing the finding of a solution path. The use of knowledge can alleviate the stated difficulties. This paper proposes the use of an enhanced state propagator composed of a dynamic engine and a low-level geometric reasoning process that is used to determine how to interact with the objects, i.e. from where and with which forces. The proposal, called ¿-PMP can be used with any kinodynamic planner, thus giving rise to e.g. ¿-RRT. The approach also includes a preprocessing step that infers from a semantic abstract knowledge described in terms of an ontology the manipulation knowledge required by the reasoning process. The proposed approach has been validated with several examples involving an holonomic mobile robot, a robot with differential constraints and a serial manipulator, and benchmarked using several state-of-the art kinodynamic planners. The results showed a significant difference in the power consumption with respect to simple physics-based planning, an improvement in the success rate and in the quality of the solution paths.
CitationUd Din, M., Rosell, J., Akbari, A. ¿-PMP: Enhancing Physics-based Motion Planners with Knowledge-Based Reasoning. "Journal of intelligent and robotic systems", 22 Setembre 2017, vol.91, núm. 3-4, p. 459-477
URIhttp://hdl.handle.net/2117/108313
DOI10.1007/s10846-017-0698-z
ISSN0921-0296
Publisher versionhttps://link.springer.com/article/10.1007%2Fs10846-017-0698-z
Collections
Share: