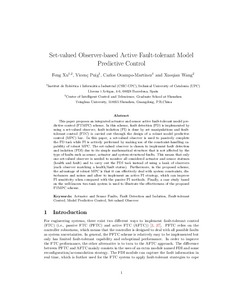 Wang, Xueqian
Document typeArticle
Rights accessOpen Access
Abstract
This paper proposes an integrated actuator and sensor active fault-tolerant model predictive control scheme. In this scheme, fault detection is implemented by using a set-valued observer, fault isolation (FI) is performed by set manipulations, and fault-tolerant control is carried out through the design of a robust model predictive control law. In this paper, a set-valued observer is used to passively complete the fault detection task, while FI is actively performed by making use of the constraint-handling capability of robust model predictive control. The set-valued observer is chosen to implement fault detection and isolation (FDI) because of its simple mathematical structure that is not affected by the type of faults such as sensor, actuator, and system-structural faults. This means that only one set-valued observer is needed to monitor all considered actuator and sensor statuses (health and fault) and to carry out the fault detection and isolation task instead of using a bank of observers (each observer matching a health/fault status). Furthermore, in the proposed scheme, the advantage of robust model predictive control is that it can effectively deal with system constraints, disturbances, and noises and allow to implement an active FI strategy, which can improve FI sensitivity when compared with the passive FI methods. Finally, a case study based on the well-known two-tank system is used to illustrate the effectiveness of the proposed fault-tolerant model predictive control scheme.
CitationXu, F., Puig, V., Ocampo-Martinez, C.A., Wang, X. Set-valued observer-based active fault-tolerant model predictive control. "Optimal control applications and methods", 1 Setembre 2017, vol. 38, núm. 5, p. 683-708.
URIhttp://hdl.handle.net/2117/108308
DOI10.1002/oca.2284
ISSN0143-2087
Publisher versionhttp://onlinelibrary.wiley.com/doi/10.1002/oca.2284/abstract?systemMessage=Wiley+Online+Library+will+be+unavailable+on+Saturday+7th+Oct+from+03.00+EDT+%2F+08%3A00+BST+%2F+12%3A30+IST+%2F+15.00+SGT+to+08.00+EDT+%2F+13.00+BST+%2F+17%3A30+IST+%2F+20.00+SGT+and+Sunday+8th+Oct+from+03.00+EDT+%2F+08%3A00+BST+%2F+12%3A30+IST+%2F+15.00+SGT+to+06.00+EDT+%2F+11.00+BST+%2F+15%3A30+IST+%2F+18.00+SGT+for+essential+maintenance.+Apologies+for+the+inconvenience+caused+.
Collections
Share: