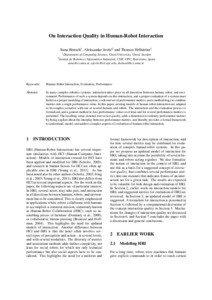 In many complex robotics systems, interaction takes place in all directions between human, robot, and environment. Performance of such a system depends on this interaction, and a proper evaluation of a system must build on a proper modeling of interaction, a relevant set of performance metrics, and a methodology to combine metrics into a single performance value. In this paper, existing models of human-robot interaction are adapted to fit complex scenarios with one or several humans and robots. The interaction and the evaluation process is formalized, and a general method to fuse performance values over time and for several performance metrics is presented. The resulting value, denoted interaction quality, adds a dimension to ordinary performance metrics by being explicit about the interplay between performance metrics, and thereby provides a formal framework to understand, model, and address complex aspects of evaluation of human-robot interaction.
CitaciónBensch, S., Jevtic, A., Hellström, T. On interaction quality in human-robot interaction. A: International Conference on Agents and Artificial Intelligence. "ICAART 2017 Proceedings of the 9th International Conference on Agents and Artificial Intelligence, vol. 1". Porto: SciTePress, 2017, p. 182-189.
URIhttp://hdl.handle.net/2117/108261
DOI10.5220/0006191601820189
ISBN978-989-758-219-6
Versión del editorhttp://www.scitepress.org/DigitalLibrary/Link.aspx?doi=10.5220/0006191601820189