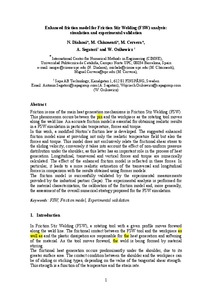 Segatori, A.
Osikowicz, W.
Document typeArticle
Rights accessOpen Access
Abstract
Friction is one of the main heat generation mechanisms in Friction Stir Welding (FSW). This phenomenon occurs between the pin and the workpiece as the rotating tool moves along the weld line. An accurate friction model is essential for obtaining realistic results in a FSW simulation in particular temperature, forces and torque. In this work, a modified Norton's friction law is developed. The suggested enhanced friction model aims at providing not only the realistic temperature field but also the forces and torque. This model does not exclusively relate the frictional shear stress to the sliding velocity; conversely it takes into account the effect of non-uniform pressure distribution under the shoulder, as this latter has an important role in the process of heat generation. Longitudinal, transversal and vertical forces and torque are numerically calculated. The effect of the enhanced friction model is reflected in these forces. In particular, it leads to a more realistic estimation of the transversal and longitudinal forces in comparison with the results obtained using former models. The friction model is successfully validated by the experimental measurements provided by the industrial partner (Sapa). The experimental analysis is performed for the material characterization, the calibration of the friction model and, more generally, the assessment of the overall numerical strategy proposed for the FSW simulation.
CitationDialami , N., Chiumenti, M., Cervera, M., Segatori, A., Osikowicz, W. Enhanced friction model for Friction Stir Welding (FSW) analysis: simulation and experimental validation. "International journal of mechanical sciences", Novembre 2017, vol. 133, p. 555-567.
URIhttp://hdl.handle.net/2117/108206
DOI10.1016/j.ijmecsci.2017.09.022
ISSN0020-7403
Publisher versionhttp://www.sciencedirect.com/science/article/pii/S0020740317316314
Collections
Share: