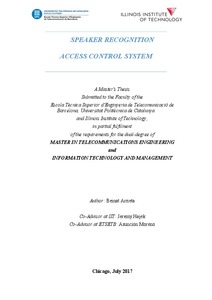 CovenanteeIllinois Institute of Technology
Document typeMaster thesis
Rights accessOpen Access
Abstract
The following document will drive the reader through the whole development of a project consisting in the investigation of the feasibility and development of an access control security system that uses voice biometrics as its cornerstone to make rooms as safe and controlled as possible in a two-factor authentication approach using open software. For that, an initial decision is presented, in which the technology that is going to be used to make the Speaker Recognition functionality possible is chosen. A detailed explanation of it is included so that the reader will know and understand the basics to follow the project development. With this, the document will go step by step through the different stages that I have faced and the requirements that came up and I had to adapt to, including the integration of the system that is nowadays up and running at IIT. The User Interface of the final application is presented together with an explanation of every step that users will have to follow to use the system correctly. Last, an estimation of the costs associated to this project is presented, which will give the reader an idea of how much starting this project from scratch would cost if the same hardware is used. Also, for those developers that would like to get some of this functionality in their systems, a link to a GitHub repository where they can find the code is also given.
SubjectsSpeech processing systems, Automatic speech recognition, Processament de la parla, Reconeixement automàtic de la parla
DegreeMÀSTER UNIVERSITARI EN ENGINYERIA DE TELECOMUNICACIÓ (Pla 2013)
URIhttp://hdl.handle.net/2117/108196
Collections
Share: