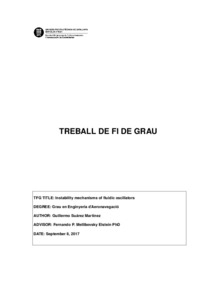 Document typeBachelor thesis
Rights accessOpen Access
Abstract
In this work, direct numerical simulation of the Navier-Stokes equations governing incom- pressible fluid flow has been employed to analyze the various flow topologies observed in a two-dimensional fluidic oscillator at the very low Reynolds's regime (Re &#8712; [25,100]), in order to elucidate the mechanisms by which oscillation begins. The main goal is to find and classify the characteristics and properties of the jet at the oscillator outlet. The study has been carried out using software based on spectral elements. The geometry being fixed and the flow incompressible, the Reynolds's number is the only independent parameter. The increasingly complex flow solutions obtained as the Reynolds is increased have been studied in the light of dynamical systems and bifurcation theory to explain complex phenomena such as hysteresis or the advent of chaotic dynamics. An increasing Reynolds's number turns an initially stationary and reflection-symmetric jet into non-symmetric, then oscillatory periodic, period doubled and finally chaotic. Sta- tistical reflection-symmetry is recovered as temporal chaos develops into spatio-temporal chaos. A few well-known local bifurcations, and possibly some global bifurcation, are responsible for the transitions. Additionally, the flow topology of the jet issued from the oscillator exit into the discharge region has been investigated. The initiation of temporal dynamics is seen to result in vortex shedding, first periodic, then irregular, from the oscillator outlet diverter. Finally, a series of discussions on the obtained results will be included that will allow to finish defining all the elements that make up the study.
SubjectsOscillators, Microwave, Oscil·ladors
URIhttp://hdl.handle.net/2117/108187
Collections
Share: