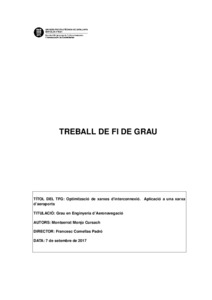 Document typeBachelor thesis
Rights accessOpen Access
Abstract
The purpose of this degree's final project is the study of those parameters that determine, after their optimitzation, the properties of a network. We will focus on the optimitzation of the airports network of the United States of 2001. Each airports is represented by a node, which contains this information: name of the airport, coordinates and the total number of airport's operations during a year. The study is based on the creation of a random network. It has the same nodes but they are connected randomly. For this reason, its properties are very different to the real network properties. Hence, an optimitzation process should be apllied: threshold accepting. The algorithm performs an optimitzation to a certain cost function by making changes to the connections between nodes. Therefore, a final network with properties of small-world, a degree histogram which follows a potential law (both properties of real networks), etc, is achieved. Seven cost functions have been used and each of them is formed by one centrality. The centralities used are based on the paths between nodes, load models, etc. Moreover, the number of airport's operations and its coordinates have been took into account. To prove the correct performance of the algorithm, four reduced networks has been generated from the real network. Once the results are obtained, the optimization of the airports network of USA has been performed by using the cost functions that works properly for this case.
SubjectsAirports, Navigation (Aeronautics), Aeroports, Navegació aèria
URIhttp://hdl.handle.net/2117/108178
Collections
Share: