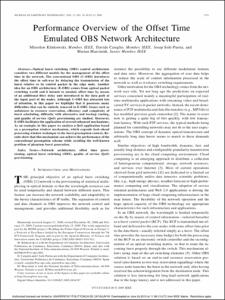 Marciniak, Marian
Document typeArticle
Rights accessOpen Access
All rights reserved. This work is protected by the corresponding intellectual and industrial property rights. Without prejudice to any existing legal exemptions, reproduction, distribution, public communication or transformation of this work are prohibited without permission of the copyright holder
Abstract
Optical burst switching (OBS) control architecture considers two different models for the management of the offset time in the network. The conventional OBS (C-OBS) introduces the offset time in soft-way by delaying the transmission of the burst relative to its control packet in the edge node. Another idea for an OBS architecture (E-OBS) comes from optical packet switching world and it intends to emulate offset time by means of an additional fiber delay unit introduced in the data path at the input port of the nodes. Although C-OBS has attracted lots of attention, in this paper we highlight that it possesses many difficulties that can be entirely removed in E-OBS. Issues such as unfairness in resource reservation, efficiency and complexity of burst scheduling, difficulty with alternative and backup routing, and quality of service (QoS) provisioning are studied. Moreover, E-OBS facilitates the application of several enhanced mechanisms. As an example, in this paper we analyze a QoS application based on a preemption window mechanism, which expands look-ahead processing window technique to the burst preemption context. Results show that this mechanism can achieve the performance of the conventional preemption scheme while avoiding the well-known problem of phantom burst generation.
CitationKlinkowski, M. [et al.]. Performance overview of the offset time emulated OBS network architecture. "Journal of lightwave technology", Juliol 2009, vol. 27, núm. 14, p. 2751-2764.
URIhttp://hdl.handle.net/2117/10817
DOI10.1109/JLT.2009.2016357
ISSN0733-8724
Collections
Share: