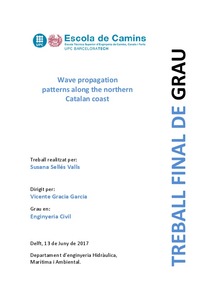 Document typeBachelor thesis
Rights accessOpen Access
Abstract
Coastal zones are home to more than half of the world’s population. Due to increasing human activity and the presence of varied and rich ecosystems in coastal regions, there is increased awareness of the importance of knowledge concerning the surrounding environment which is acquired through observation and modeling of coastal processes. The aim of this study is to determine the wave propagation patterns along the northern coast of Catalonia on the basis of the wave data recorded by the existing oceanographic network. The study area contains the two most representative coastal layouts in the northern Catalan littoral: El Maresme, with homogeneous and open coasts and La Costa Brava, encompassing cliffs and rocky coasts. The purpose of such analysis is to perform the coastal clustering based on the wave exposure and to identify the most vulnerable coastal stretches. SWAN has been used as the software to carry out the simulations of the wave propagation from deep waters all the way to the coastline. The mean wave regime (study cases) and the digital terrain model (bathymetry) are the necessary inputs to run SWAN. This software propagates the information read on the boundary (wave-height, period and wave direction ) and generates a file in a matrix format and then it is post-processed with Matlab to achieve the graphic results. The process is repeated twice. It computes the waves on a coarse grid for a larger region first and then on a finer grid for a smaller region to achieve a higher resolution. The final results show that as expected, the wave propagation patterns found are governed by the wave-period, offshore direction, shorelines orientation and bathymetry. A non-homogeneous distribution of the wave energy along the coastal area has been found. However, both of the zones, La Costa Brava and El Maresme, exhibit similar wave propagation patterns within their own borders. Moreover, several coastal sections within both regions present locations where the wave energy is highly concentrated and therefore higher wave-heights are achieved. However, the areas within La Costa Brava manifest a higher wave exposure than the unsheltered regions of El Maresme.
SubjectsCoastal engineering, Ocean waves, Enginyeria de costes, Onades
URIhttp://hdl.handle.net/2117/108165
Collections
Share: