Thermodynamic behavior of a one-dimensional Bose gas at low temperature 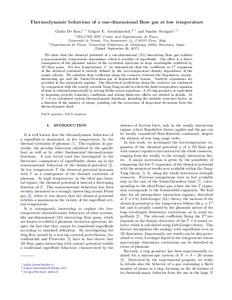 Except where otherwise noted, content on this work is licensed under a Creative Commons license : Attribution-NonCommercial-NoDerivs 3.0 Spain
Abstract
We show that the chemical potential of a one-dimensional (1D) interacting Bose gas exhibits a nonmonotonic temperature dependence which is peculiar of superfluids. The effect is a direct consequence of the phononic nature of the excitation spectrum at large wavelengths exhibited by 1D Bose gases. For low temperatures T, we demonstrate that the coefficient in T^2 expansion of the chemical potential is entirely defined by the zero-temperature density dependence of the sound velocity. We calculate that coefficient along the crossover between the Bogoliubov weakly interacting gas and the Tonks-Girardeau gas of impenetrable bosons. Analytic expansions are provided in the asymptotic regimes. The theoretical predictions along the crossover are confirmed by comparison with the exactly solvable Yang-Yang model in which the finite-temperature equation of state is obtained numerically by solving Bethe-ansatz equations. A 1D ring geometry is equivalent to imposing periodic boundary conditions and arising finite-size effects are studied in detail. At T=0 we calculated various thermodynamic functions, including the inelastic structure factor, as a function of the number of atoms, pointing out the occurrence of important deviations from the thermodynamic limit.
Citationde Rosi, G., Astrakharchik, G., Stringari, S. Thermodynamic behavior of a one-dimensional Bose gas at low temperature. "Physical Review A", 11 Juliol 2017, vol. 96, núm. 1, p. 1-13.
URIhttp://hdl.handle.net/2117/108073
DOI10.1103/PhysRevA.96.013613
ISSN2469-9926
Publisher versionhttps://journals.aps.org/pra/abstract/10.1103/PhysRevA.96.013613
Collections
Share: