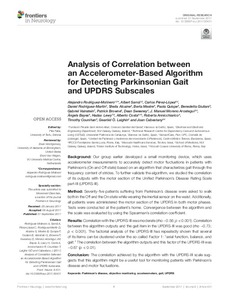 Except where otherwise noted, content on this work is licensed under a Creative Commons license : Attribution 3.0 Spain
ProjectREMPARK - Personal Health Device for the Remote and Autonomous Management of Parkinson’s Disease (EC-FP7-287677)
Abstract
Background: Our group earlier developed a small monitoring device, which uses accelerometer measurements to accurately detect motor fluctuations in patients with Parkinson’s (On and Off state) based on an algorithm that characterizes gait through the frequency content of strides. To further validate the algorithm, we studied the correlation of its outputs with the motor section of the Unified Parkinson’s Disease Rating Scale part-III (UPDRS-III). Method: Seventy-five patients suffering from Parkinson’s disease were asked to walk both in the Off and the On state while wearing the inertial sensor on the waist. Additionally, all patients were administered the motor section of the UPDRS in both motor phases. Tests were conducted at the patient’s home. Convergence between the algorithm and the scale was evaluated by using the Spearman’s correlation coefficient. results: Correlation with the UPDRS-III was moderate (rho -0.56; p < 0.001). Correlation between the algorithm outputs and the gait item in the UPDRS-III was good (rho -0.73; p < 0.001). The factorial analysis of the UPDRS-III has repeatedly shown that several of its items can be clustered under the so-called Factor 1: “axial function, balance, and gait.” The correlation between the algorithm outputs and this factor of the UPDRS-III was -0.67 (p < 0.01). conclusion: The correlation achieved by the algorithm with the UPDRS-III scale suggests that this algorithm might be a useful tool for monitoring patients with Parkinson’s disease and motor fluctuations.
CitationRodríguez, A., Sama, A., Perez, C., Rodriguez-Martin, D., Alcaine, S., Mestre, B., Quispe, P., Giuliani, B., Vainstein, G., Browne, P., Sweeney, D., Moreno, J., Bayés, À., Lewy, H., Costa, A., Annicchiarico, R., Counihan, T., ÓLaighin, G., Cabestany, J. Analysis of correlation between an accelerometer-Based algorithm for Detecting Parkinsonian gait and UPDRS subscales. "Frontiers in Neurology", 1 Setembre 2017, vol. 8, p. 1-6.
URIhttp://hdl.handle.net/2117/108053
DOI10.3389/fneur.2017.00431
ISSN1664-2295
Publisher versionhttp://journal.frontiersin.org/article/10.3389/fneur.2017.00431/full
Collections
Share: