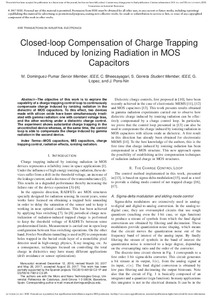 Document typeArticle
PublisherInstitute of Electrical and Electronics Engineers (IEEE)
Rights accessOpen Access
Abstract
The objective of this work is to explore the capability of a charge trapping control loop to continuously compensate charge induced by ionizing radiation in the dielectric of MOS capacitors. To this effect, two devices made with silicon oxide have been simultaneously irradiated with gamma radiation: one with constant voltage bias, and the other working under a dielectric charge control. The experiment shows substantial charge trapping in the uncontrolled device whereas, at the same time, the control loop is able to compensate the charge induced by gamma radiation in the second device.
CitationDominguez, M., Bheesayagari, C., Gorreta, S., Lopez -Chavez, G., Pons, J. Closed-loop compensation of charge trapping induced by ionizing radiation in MOS capacitors. "IEEE transactions on industrial electronics", 31 Agost 2017, vol. 65, num. 3, p. 2518-2524
URIhttp://hdl.handle.net/2117/108041
DOI10.1109/TIE.2017.2748033
ISSN0278-0046
Publisher versionhttp://ieeexplore.ieee.org/document/8023818/
Collections
Share: