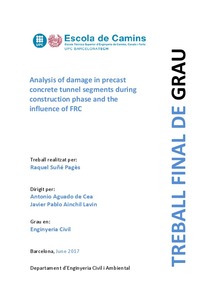 Except where otherwise noted, content on this work is licensed under a Creative Commons license : Attribution 3.0 Spain
Abstract
The increase of the demand for tunnels is palpable. In big cities with urban density ever increasing, more and more infrastructure is competing for the limited available space, so the underground constructions have become a suitable solution. Therefore, there is a high demand for optimizing the construction processes, as well as the materials and machinery. The development of the tunnel boring machines (TBMs) had represented a significant step forward in terms of efficiency. When constructing tunnels with TBMs, the tunnel lining is built during the excavation. The precast concrete pieces that create the lining are used as a support for the TBM hydraulic jacks to push forward the machine. This interaction between the TBM and the lining can highly influence the occurring damage in the segments. The tunnel lining is one of the most important parts of the tunnel as it ensures the protection of the cavern and the stability of the tunnel, hence the quality is of paramount importance. As mentioned before, the construction phase of the tunnel is one of the most strenuous loading case for the segments. In the presented paper, two possible causes of segment damage are analysed: the uneven support of the segments when subjected to the hydraulic jack’s loading and the radial eccentricity of the hydraulic jacks. In both cases, the stress field developed is obtained through the so-called Strut-and-tie method. This method provides a simplified version of the occurring stress fields that is very useful in the calculation of D-regions where the common flexion theory is not applicable. In addition, the simplicity of the strut-and-tie models helps to provide a physical understanding of the stress fields. In Chapter 3 four cases of possible uneven supports of the segments are presented. Through the Strut-and-tie method, the stresses developed in the segment are analysed depending on the segment’s geometrical characteristics and the load applied. In Chapter 4 the effect of the radial eccentricity of the hydraulic jacks is considered. The stress field is calculated also by means of the strut-and-tie method. In both cases, the corresponding segment damages due to the two loading situations are described. Once the failure situations in Chapters 3 and 4 are described, the advantages of using fibres as a reinforcement for the segments are presented. Prior studies have shown that fibres have a positive influence in the behaviour of the hardened concrete and that they are suitable for the tunnel segments. Fibre reinforced concrete in tunnel segments may offer additional advantages over those of conventional reinforcement. In Chapter 5, the advantages of FRC segments and in particular to the type of failures described in the previous chapters are shown.
SubjectsTunneling, Boring machinery, Túnels -- Construcció, Perforadores
DegreeGRAU EN ENGINYERIA CIVIL (Pla 2010)
URIhttp://hdl.handle.net/2117/107982
Collections
Share: