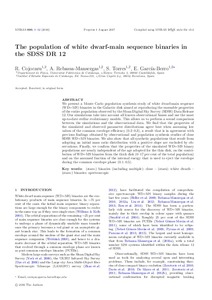 Document typeArticle
Rights accessOpen Access
Abstract
We present a Monte Carlo population synthesis study of white dwarf-main sequence (WD+MS) binaries in the Galactic disc aimed at reproducing the ensemble properties of the entire population observed by the Sloan Digital Sky Survey (SDSS) Data Release 12. Our simulations take into account all known observational biases and use the most up-to-date stellar evolutionary models. This allows us to perform a sound comparison between the simulations and the observational data. We find that the properties of the simulated and observed parameter distributions agree best when assuming low values of the common envelope efficiency (0.2-0.3), a result that is in agreement with previous findings obtained by observational and population synthesis studies of close SDSSWD+MS binaries.We also show that all synthetic populations that result from adopting an initial mass ratio distribution with a positive slope are excluded by observations. Finally, we confirm that the properties of the simulated WD+MS binary populations are nearly independent of the age adopted for the thin disc, on the contribution of WD+MS binaries from the thick disc (0-17 per cent of the total population) and on the assumed fraction of the internal energy that is used to eject the envelope during the common envelope phase (0.1-0.5).
CitationCojocaru, E., Rebassa, A., Torres, S., Garcia-berro, E. The population of white dwarf-main sequence binaries in the SDSS DR 12. "Monthly notices of the Royal Astronomical Society", 11 Setembre 2017, vol. 470, núm. 2, p. 1442-1452.
URIhttp://hdl.handle.net/2117/107977
DOI10.1093/mnras/stx1326
ISSN0035-8711
Publisher versionhttps://academic.oup.com/mnras/article-abstract/470/2/1442/3858034/The-population-of-white-dwarf-main-sequence?redirectedFrom=fulltext
Collections
Share: