Preparation of nanocomposites of poly(epsilon-caprolactone) and multi-walled carbon nanotubes by ultrasound micro-molding. Influence of nanotubes on melting and crystallization 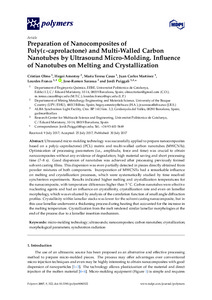 Document typeArticle
Rights accessOpen Access
Abstract
Ultrasound micro-molding technology was successfully applied to prepare nanocomposites based on a poly(e-caprolactone) (PCL) matrix and multi-walled carbon nanotubes (MWCNTs). Optimization of processing parameters (i.e. amplitude, force and time) was crucial to obtain nanocomposites without any evidence of degradation, high material saving and short processing time (7–8 s). Good dispersion of nanotubes was achieved after processing previously formed solvent casting films. This dispersion was even partially detected in pieces directly obtained from powder mixtures of both components. Incorporation of MWCNTs had a remarkable influence on melting and crystallization processes, which were systematically studied by time resolved synchrotron experiments. Results indicated higher melting and crystallization temperatures for the nanocomposite, with temperature differences higher than 5 °C. Carbon nanotubes were effective nucleating agents and had an influence on crystallinity, crystallization rate and even on lamellar morphology, which was evaluated by analysis of the correlation function of small angle diffraction profiles. Crystallinity within lamellar stacks was lower for the solvent casting nanocomposite, but in this case lamellae underwent a thickening process during heating that accounted for the increase in the melting temperature. Crystallization from the melt rendered similar lamellar morphologies at the end of the process due to a lamellar insertion mechanism.
CitationOlmo, C., Amestoy, H., Casas, M., Martinez, J., Franco, M., Sarasua, J., Puiggali, J. Preparation of nanocomposites of poly(epsilon-caprolactone) and multi-walled carbon nanotubes by ultrasound micro-molding. Influence of nanotubes on melting and crystallization. "Polymers", 1 Agost 2017, vol. 9, núm. 8, p. 1-18.
URIhttp://hdl.handle.net/2117/107899
DOI10.3390/polym9080322
ISSN2073-4360
Publisher versionhttp://www.mdpi.com/2073-4360/9/8/322
Collections
Share: