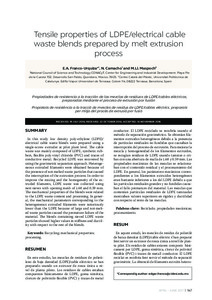 In this study low density poly-ethylene (LDPE)/electrical cable waste blends were prepared using asingle-screw extruder at pilot plant level. The cable waste was mainly composed of LDPE, synthetic rubbers, flexible poly-vinyl chloride (PVC) and traces of conductive metal. Recycled LDPE was recovered by using the gravimetric separation approach. Heterogeneous extruded filaments were obtained because of the presence of not-melted waste particles that caused the interruption of the extrusion process. In order to improve the mixing and the homogeneity of the extruded filaments, LDPE waste was collected usingnest sieves with opening mesh of 1.68 and 0.59 mm. The mechanical properties of the blends were related to the LDPE waste content and processing. In general, the mechanical parameters corresponding to the heterogeneous extruded filaments were notoriously lower than the LDPE because of large and not-meltedwaste particles caused the premature failure of thematerial. The blends containing sieved LDPE waste particles showed higher values in stiffness and ductility with respect to the rest of the blends.
CitationFranco-Urquiza, E., Camacho, N., Maspoch, M. Tensile properties of LDPE/electrical cable waste blends prepared by melt extrusion process. "Afinidad: revista de química teórica y aplicada", 1 Abril 2017, vol. 74, núm. 578, p. 147-153.
URIhttp://hdl.handle.net/2117/107885
ISSN0001-9704