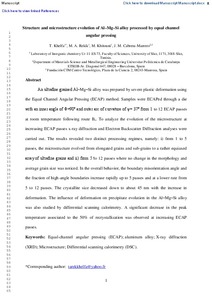 Document typeArticle
Rights accessOpen Access
Abstract
An ultrafine grained Al–Mg–Si alloy was prepared by severe plastic deformation using the equal-channel angular pressing (ECAP) method. Samples were ECAPed through a die with an inner angle of F = 90° and outer arc of curvature of ¿ = 37° from 1 to 12 ECAP passes at room temperature following route Bc. To analyze the evolution of the microstructure at increasing ECAP passes, X-ray diffraction and electron backscatter diffraction analyses were carried out. The results revealed two distinct processing regimes, namely (i) from 1 to 5 passes, the microstructure evolved from elongated grains and sub-grains to a rather equiaxed array of ultrafine grains and (ii) from 5 to 12 passes where no change in the morphology and average grain size was noticed. In the overall behavior, the boundary misorientation angle and the fraction of high-angle boundaries increase rapidly up to 5 passes and at a lower rate from 5 to 12 passes. The crystallite size decreased down to about 45 nm with the increase in deformation. The influence of deformation on precipitate evolution in the Al–Mg–Si alloy was also studied by differential scanning calorimetry. A significant decrease in the peak temperature associated to the 50% of recrystallization was observed at increasing ECAP passes.
CitationKhelfa, T., Rekik, M., Khitouni, M., Cabrera, J. Structure and microstructure evolution of Al-Mg-Si alloy processed by equal-channel angular pressing. "International journal of advanced manufacturing technology", 1 Setembre 2017, vol. 92, núm. 5-8, p. 1731-1740.
URIhttp://hdl.handle.net/2117/107884
DOI10.1007/s00170-017-0282-5
ISSN0268-3768
Publisher versionhttps://link.springer.com/article/10.1007%2Fs00170-017-0282-5
Collections
Share: