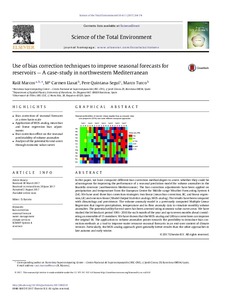 Show full item record
Marcos, Raül
Llasat, Mª Carmen
Quintana-Seguí, Pere
Turco, Marco
Document typeArticle
PublisherElsevier
Rights accessOpen Access
Abstract
In this paper, we have compared different bias correction methodologies to assess whether they could be advantageous for improving the performance of a seasonal prediction model for volume anomalies in the Boadella reservoir (northwestern Mediterranean). The bias correction adjustments have been applied on precipitation and temperature from the European Centre for Middle-range Weather Forecasting System 4 (S4). We have used three bias correction strategies: two linear (mean bias correction, BC, and linear regression, LR) and one non-linear (Model Output Statistics analogs, MOS-analog). The results have been compared with climatology and persistence. The volume-anomaly model is a previously computed Multiple Linear Regression that ingests precipitation, temperature and in-flow anomaly data to simulate monthly volume anomalies. The potential utility for end-users has been assessed using economic value curve areas. We have studied the S4 hindcast period 1981–2010 for each month of the year and up to seven months ahead considering an ensemble of 15 members. We have shown that the MOS-analog and LR bias corrections can improve the original S4. The application to volume anomalies points towards the possibility to introduce bias correction methods as a tool to improve water resource seasonal forecasts in an end-user context of climate services. Particularly, the MOS-analog approach gives generally better results than the other approaches in late autumn and early winter.
CitationMarcos, R. [et al.]. Use of bias correction techniques to improve seasonal forecasts for reservoirs — A case-study in northwestern Mediterranean. "Science of The Total Environment", 1 Gener 2018, vol. 610-611, p. 64-74.
URIhttp://hdl.handle.net/2117/107843
DOI10.1016/j.scitotenv.2017.08.010
ISSN0048-9697
Publisher versionhttp://www.sciencedirect.com/science/article/pii/S0048969717320089
Collections
Share: