Simulation and understanding of atomic and molecular quantum crystals 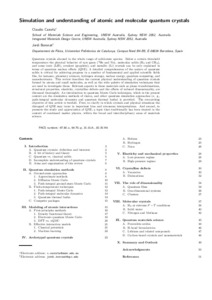 Document typeArticle
Rights accessOpen Access
Abstract
Quantum crystals abound in the whole range of solid-state species. Below a certain threshold temperature the physical behavior of rare gases (4He and Ne), molecular solids (H2 and CH4), and some ionic (LiH), covalent (graphite), and metallic (Li) crystals can be explained only in terms of quantum nuclear effects (QNE). A detailed comprehension of the nature of quantum solids is critical for achieving progress in a number of fundamental and applied scientific fields such as planetary sciences, hydrogen storage, nuclear energy, quantum computing, and nanoelectronics. This review describes the current physical understanding of quantum crystals formed by atoms and small molecules, as well as the wide palette of simulation techniques that are used to investigate them. Relevant aspects in these materials such as phase transformations, structural properties, elasticity, crystalline defects, and the effects of reduced dimensionality are discussed thoroughly. An introduction to quantum Monte Carlo techniques, which in the present context are the simulation methods of choice, and other quantum simulation approaches (e.g., path-integral molecular dynamics and quantum thermal baths) is provided. The overarching objective of this article is twofold: first, to clarify in which crystals and physical situations the disregard of QNE may incur in important bias and erroneous interpretations. And second, to promote the study and appreciation of QNE, a topic that traditionally has been treated in the context of condensed matter physics, within the broad and interdisciplinary areas of materials science.
CitationCazorla, C., Boronat, J. Simulation and understanding of atomic and molecular quantum crystals. "Reviews of modern physics", 3 Agost 2017, vol. 89, núm. 3, p. 1-54.
URIhttp://hdl.handle.net/2117/107841
DOI10.1103/RevModPhys.89.035003
ISSN0034-6861
Publisher versionhttps://journals.aps.org/rmp/abstract/10.1103/RevModPhys.89.035003
Collections
Share: