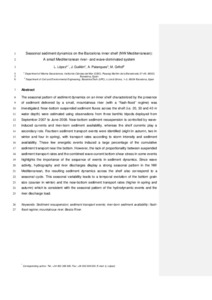 The seasonal pattern of sediment dynamics on an inner shelf characterized by the presence of sediment delivered by a small, mountainous river (with a “flash-flood” regime) was investigated. Near-bottom suspended sediment fluxes across the shelf (i.e. 20, 30 and 40 m water depth) were estimated using observations from three benthic tripods deployed from September 2007 to June 2008. Near-bottom sediment resuspension was controlled by wave-induced currents and river-born sediment availability, whereas the shelf currents played a secondary role. Fourteen sediment transport events were identified (eight in autumn, two in winter and four in spring), with transport rates according to storm intensity and sediment availability. These few energetic events induced a large percentage of the cumulative sediment transport near the bottom. However, the lack of proportionality between suspended sediment transport rates and the combined wave-current bottom shear stress in some events highlights the importance of the sequence of events in sediment dynamics. Since wave activity, hydrography and river discharges display a strong seasonal pattern in the NW Mediterranean, the resulting sediment dynamics across the shelf also correspond to a seasonal cycle. This seasonal variability leads to a temporal evolution of the bottom grain size (coarser in winter) and the near-bottom sediment transport rates (higher in spring and autumn) which is consistent with the seasonal pattern of the hydrodynamic events and the river discharge load.
CitationLopez, L., Guillén, J., Palanques, A., Grifoll, M. Seasonal sediment dynamics on the Barcelona inner shelf (NW Mediterranean): a small Mediterranean river- and wave-dominated system. "Continental shelf research", Agost 2017, vol. 145, p. 80-94.
URIhttp://hdl.handle.net/2117/107776
DOI10.1016/j.csr.2017.07.008
ISSN0278-4343
Publisher versionhttp://www.sciencedirect.com/science/article/pii/S027843431630200X