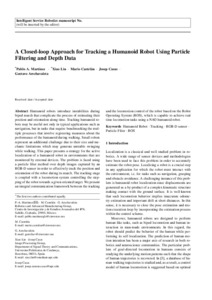 Arechavaleta, Gustavo
Document typeArticle
PublisherSpringer
Rights accessOpen Access
Abstract
Humanoid robots introduce instabilities during biped march that complicate the process of estimating their position and orientation along time. Tracking humanoid robots may be useful not only in typical applications such as navigation, but in tasks that require benchmarking the multiple processes that involve registering measures about the performance of the humanoid during walking. Small robots represent an additional challenge due to their size and mechanic limitations which may generate unstable swinging while walking. This paper presents a strategy for the active localization of a humanoid robot in environments that are monitored by external devices. The problem is faced using a particle filter method over depth images captured by an RGB-D sensor in order to effectively track the position and orientation of the robot during its march. The tracking stage is coupled with a locomotion system controlling the stepping of the robot toward a given oriented target. We present an integral communication framework between the tracking and the locomotion control of the robot based on the robot operating system, which is capable of achieving real-time locomotion tasks using a NAO humanoid robot.The final publication is available at Springer via http://dx.doi.org/10.1007/s11370-017-0230-0
CitationMartínez, P., Lin, X., Castelan, M., Casas, J., Arechavaleta, G. A closed-loop approach for tracking a humanoid robot using particle filtering and depth data. "Intelligent service robotics", 24 Maig 2017, p. 1-16.
URIhttp://hdl.handle.net/2117/107765
DOI10.1007/s11370-017-0230-0
ISSN1861-2776
Publisher versionhttps://link.springer.com/article/10.1007%2Fs11370-017-0230-0
Collections
Share: