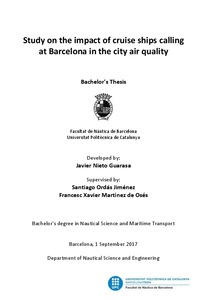 122901_Study on the impact of cruise ships calling at Barcelona in the city air quality.pdf (18,95Mb)
Share:

Except where otherwise noted, content on this work is licensed under a Creative Commons license : Attribution-NonCommercial-NoDerivs 3.0 Spain
Description
Barcelona ranks among top 10 cruise ports in the world and it is first in Europe by number of passengers. Its popularity as homeport is explained thanks to a passenger-friendly port-city integration, in which cruise ships berth quite near from the main city attractions. The figures are impressive: 5% cruise passengers annual growth, up to 400M€ direct expenditure (around 0.7% Barcelona\'s GDP) and the largest and newest cruise ships being homeported at Barcelona. However, these figures may hide negative impacts on the city pollution levels. This paper focuses on the study of the impact that cruise ships may have on air quality. For this purpose, real traffic during 2016 in Barcelona was analyzed to create an Emission Inventory using the EMEP/EEA algorithm for shipping. The obtained figures were carefully studied so as to develop an Immission Inventory using the Gaussian plume mathematical model. It was found that cruise ships were responsible for about 15% of port emissions (NOx). Nevertheless, the overall impact was determined to be variable and heavily dependent on atmospheric conditions and the parameters considered (sustainability of scale). Eventually, a brief review on several methods to reduce emissions in port was also done. The main aim of the project is to assess if cruise ships are a large source of pollution in the city by the figures and to raise awareness about the problems this pollution can have on Barcelona inhabitants.
SubjectsMarine pollution, Air quality, Vaixells -- Contaminació, Barcelona -- Contaminació, Aire -- Qualitat -- Barcelona, Aire -- Contaminació -- Barcelona
DegreeGRAU EN NÀUTICA I TRANSPORT MARÍTIM (Pla 2010)
URIhttp://hdl.handle.net/2117/107741
Collections
Share: