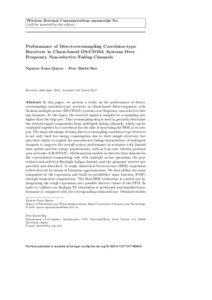 Document typeArticle
Rights accessOpen Access
Abstract
In this paper, we present a study on the performance of direct-oversampling correlator-type receivers in chaos-based direct-sequence code division multiple access systems over frequency non-selective fading channels. At the input, the received signal is sampled at a sampling rate higher than the chip rate. This oversampling step is used to precisely determine the delayed-signal components from multipath fading channels, which can be combined together by a correlator for the sake of increasing the SNR at its output. The main advantage of using direct-oversampling correlator-type receivers is not only their low energy consumption due to their simple structure, but also their ability to exploit the non-selective fading characteristic of multipath channels to improve the overall system performance in scenarios with limited data speeds and low energy requirements, such as low-rate wireless personal area networks. Mathematical models in discrete-time domain for the conventional transmitting side with multiple access operation, the generalized non-selective Rayleigh fading channel, and the proposed receiver are provided and described. A rough theoretical bit-error-rate (BER) expression is first derived by means of Gaussian approximation. We then define the main component in the expression and build its probability mass function through numerical computation. The final BER estimation is carried out by integrating the rough expression over possible discrete values of the PFM. In order to validate our findings, PC simulation is performed and simulated performance is compared with the corresponding estimated one. Obtained results show that the system performance get better with the increment of the number of paths in the channel.
CitationNguyen, X., Barlet, P. Performance of direct-oversampling correlator-type receivers in chaos-based DS-CDMA systems over frequency non-selective fading channels. "Wireless personal communications", 8 Març 2017, vol. 95, núm. 4, p. 4357-4379.
URIhttp://hdl.handle.net/2117/107656
DOI10.1007/s11277-017-4084-8
ISSN0929-6212
Publisher versionhttp://link.springer.com/article/10.1007%2Fs11277-017-4084-8
Collections
Share: