Rejection of ammonium and nitrate from sodium chloride solutions by nanofiltration: Effect of dominant-salt concentration on the trace-ion rejection 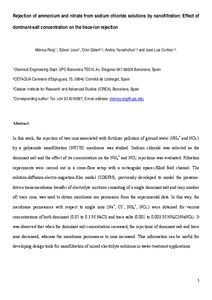 Document typeArticle
Rights accessOpen Access
Abstract
In this work, the rejection of two ions associated with fertilizer pollution of ground water (NH4and NO3) by a polyamide nanofiltration (NF270) membrane was studied. Sodium chloride was selected as the dominant salt and the effect of its concentration on the NH4 and NO3 rejections was evaluated. Filtration experiments were carried out in a cross-flow setup with a rectangular spacer-filled feed channel. The solution-diffusion-electro-migration-film model (SDEFM), previously developed to model the pressure-driven trans-membrane transfer of electrolyte mixtures consisting of a single dominant salt and (any number of) trace ions, was used to obtain membrane ion permeance from the experimental data. In this way, the membrane permeances with respect to single ions (Na,Cl,NH4,NO3) were obtained for various concentrations of both dominant (0.05–0.3 M NaCl) and trace salts (0.001–0.003 M NH4Cl/NaNO3). It was observed that when the dominant salt concentration increased, the rejections of dominant salt and trace ions decreased, whereas the membrane permeances to ions increased. This information can be useful for developing design tools for nanofiltration of mixed electrolyte solutions in water-treatment applications.
CitationReig, M., Licon , E., Gibert, O., Yaroshchuk, A., Cortina, J. Rejection of ammonium and nitrate from sodium chloride solutions by nanofiltration: Effect of dominant-salt concentration on the trace-ion rejection. "Chemical engineering journal", 1 Novembre 2016, vol. 303, p. 401-408.
URIhttp://hdl.handle.net/2117/107556
DOI10.1016/j.cej.2016.06.025
ISSN1385-8947
Publisher versionhttp://www.sciencedirect.com/science/article/pii/S1385894716308324
Collections
Share: