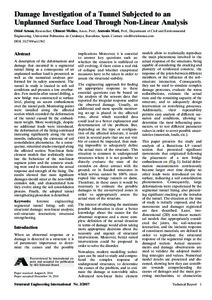 A description of the deformations and damage that occurred in a segmental tunnel lining as a consequence of an unplanned surface load is presented, as well as the numerical analyses performed for its safety assessment. The tunnel in study is located in soft soil conditions and presents a low overburden. Few months after tunnel drilling, a new bridge was constructed at surface level, placing an access embankment over the tunnel path. Monitoring points were installed along the affected section which recorded the deformation of the tunnel caused by the embankment weight. More worryingly, despite no additional loads were introduced, the deformation of the lining continued increasing significantly along the next months, indicating the existence of soil consolidation phenomena. As a consequence, structural cracks emerged along the affected section. Non-linear finite element models that realistically simulate the behaviour of the non-linear segment joints and the concrete cracking were used to characterize the actual response and strength of the lining. The results showed that most significant damages should occur at the non-visible extrados side, and characterized how they evolve along the soil consolidation process. Finally, the adopted tunnel strengthening procedure is described.