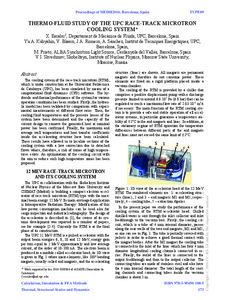 Sánchez Díaz, Alexandre
Prieto, M.
Shvedunov, V.I.
Document typeConference lecture
Rights accessOpen Access
Abstract
The cooling system of the race-track microtron (RTM), which is under construction at the Universitat Politècnica de Catalunya (UPC), has been simulated by means of a computational fluid dynamics (CFD) software. The hydraulic and thermal performance of the system for various operation conditions has been studied. Firstly, the hydraulic model has been validated by comparison with experimental measurements at different flow rates. Then, the cooling fluid temperatures and the pressure losses of the system have been determined and the capacity of the current design to remove the generated heat at nominal power has been confirmed. Finally, the maximum and average wall temperatures and heat transfer coefficients inside the accelerating structure have been calculated. These results have allowed us to localize sections of the cooling system with a low convection due to detached flows where, therefore, a risk of zones of high temperatures exists. An optimization of the cooling circuit with the aim to reduce such high temperature zones has been proposed.
CitationEscaler, X., Koubychine, Y.A., Blasco, V., Romero, J., Sanchez, A., Prieto, M., Shvedunov, V. Thermo-fluid study of the upc race-track microtron cooling system. A: Mechanical Engineering Design of Synchrotron Radiation Equipment and Instrumentation. "MEDSI 2016: Mechanical Engineering Design of Synchrotron Radiation Equipment and Instrumentation, COSMOCAIXA Science Museum, Barcelona, Spain, September 11-16, 2016". Barcelona: 2016, p. 173-175.
URIhttp://hdl.handle.net/2117/107493
ISBN978-3-95450-188-5
Publisher versionhttp://accelconf.web.cern.ch/AccelConf/medsi2016/papers/tupe09.pdf
Collections
Share: