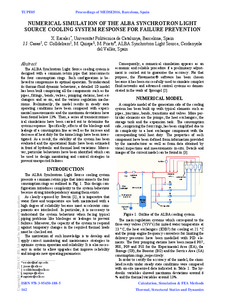 Casas, Joan
Colldelram, Carles
Quispe, Marcos
Prieto Moline, María Montserrat
Document typeConference lecture
Rights accessOpen Access
Abstract
The ALBA Synchrotron Light Source cooling system is designed with a common return pipe that interconnects the four consumption rings. Such configuration is believed to compromise its optimal operation. To understand its thermo-fluid dynamic behaviour, a detailed 1D model has been built comprising all the components such as the pipes, fittings, bends, valves, pumping stations, heat exchangers and so on, and the various regulation mechanisms. Preliminarily, the model results in steady state operating conditions have been compared with experimental measurements and the maximum deviations have been found below 13%. Then, a series of transient numerical simulations have been carried out to determine the system response. Specifically, effects of the blockage and leakage of a consumption line as well as the increase and decrease of heat duty for the tunnel rings have been investigated. As a result, the stability of the system has been evaluated and the operational limits have been estimated in front of hydraulic and thermal load variations. Moreover, particular behaviours have been identified which can be used to design monitoring and control strategies to prevent unexpected failures.
CitationEscaler, X., Casas, J., Colldelram, C., Quispe, M., Prieto, M. Numerical simulation of the alba synchrotron light source cooling system response for failure prevention. A: Mechanical Engineering Design of Synchrotron Radiation Equipment and Instrumentation. "MEDSI 2016: Mechanical Engineering Design of Synchrotron Radiation Equipment and Instrumentation, COSMOCAIXA Science Museum, Barcelona, Spain, September 11-16, 2016". Barcelona: 2016, p. 162-164.
URIhttp://hdl.handle.net/2117/107483
ISBN978-3-95450-188-5
Publisher versionhttp://accelconf.web.cern.ch/AccelConf/medsi2016/papers/tupe05.pdf
Collections
Share: