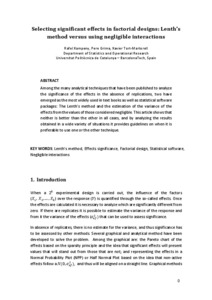 Document typeArticle
Rights accessOpen Access
Abstract
When a factorial design has some missing value but there are contrasts (at least as many as there are missing values) corresponding to interactions that can be considered negligible, equating the expressions of those contrasts to 0 allows the missing values to be deduced. This procedure allows estimating values that correspond to runs that have gone wrong or could not be performed as planned, as well as to reduce the experimental plan while saving some runs whose results can be estimated a posteriori. The problem is that the estimated values have a variance that is higher than that of the experimental runs, and the variance depends on which are the missing values and the contrasts used to make the estimate. This article performs a thorough analysis of the variances obtained by estimating up to 2 missing values in 8-run designs and up to 5 in 16-run designs, with tables included which provide the missing values and contrasts that should be used to obtain estimates that have minimal variability.
Description
This is the peer reviewed version of the following article: “Xampeny, R., Grima, P., Tort-Martorell, X. (2017) Estimating missing values from negligible interactions in factorial designs, (2017)1-13.” which has been published in final form at [doi: 10.1002/qre.2172]. This article may be used for non-commercial purposes in accordance with Wiley Terms and Conditions for Self-Archiving."
CitationXampeny, R., Grima, P., Tort-Martorell, J. Estimating missing values from negligible interactions in factorial designs. "Quality and reliability engineering international", 1 Gener 2017, p. 1-13.
URIhttp://hdl.handle.net/2117/107424
DOI10.1002/qre.2172
ISSN0748-8017
Publisher versionhttp://onlinelibrary.wiley.com/doi/10.1002/qre.2172/abstract
Collections
Share: