Analysis of current intensification in the NorthWest Mediterranean Shelf 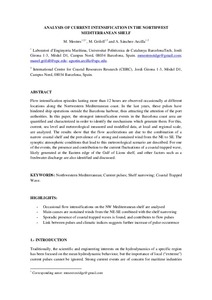 Document typeArticle
Rights accessOpen Access
Abstract
Flow intensification episodes lasting more than 12 h are observed occasionally at different locations along the Northwestern Mediterranean coast. In the last years, these pulses have hindered ship operations outside the Barcelona harbour, thus attracting the attention of the port authorities. In this paper, the strongest intensification events in the Barcelona coast area are quantified and characterized in order to identify the mechanisms which generate them. For this, current, sea level and meteorological measured and modelled data, at local and regional scale, are analysed. The results show that the flow accelerations are due to the combination of a narrow coastal shelf and the prevalence of a strong and sustained wind from the NE to SE. The synoptic atmospheric conditions that lead to this meteorological scenario are described. For one of the events, the presence and contribution to the current fluctuations of a coastal trapped wave, likely generated at the Eastern edge of the Gulf of Lions shelf, and other factors such as a freshwater discharge are also identified and discussed.
CitationMestres, M., Grifoll, M., Sanchez-Arcilla, A. Analysis of current intensification in the NorthWest Mediterranean Shelf. "Continental shelf research", Febrer 2016, vol. 114, p. 29-40.
URIhttp://hdl.handle.net/2117/107378
DOI10.1016/j.csr.2015.12.011
ISSN0278-4343
Publisher versionhttp://www.sciencedirect.com/science/article/pii/S0278434315301151
Collections
Share: